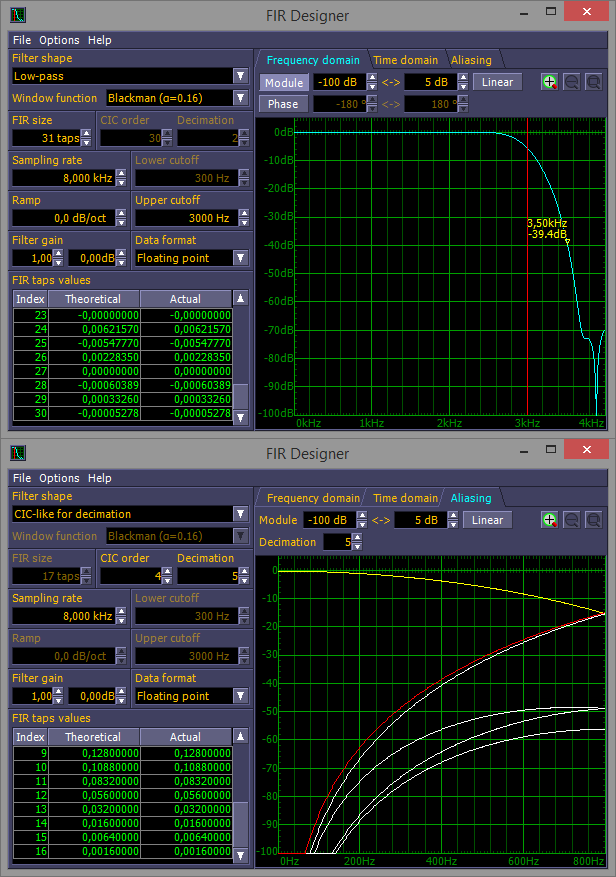 FIR Designer is an interactive software tool for Finite Impulse Response (FIR) filter design and study. It has a very intuitive user interface that gives the possibility to see in real time the effects of changing various filter parameters and supports the following filter shapes: low-pass, low-pass square root raised cosine, low-pass gaussian, high-pass, band-pass, band-stop, Hilbert transform, averaging, differentiator and CIC-like for decimation. Some of the filter shapes can be combined with one of the following window functions: rectangular, triangular (Bartlett), cosine, Hamming, Blackman (with α=0.16), Blackman-Harris, Blackman-Nuttall, Hann (Hanning) and Nuttall 4b.

The low-pass, high-pass, band-pass and band-stop filter shapes are generated using the Windowed Sinc method. This insures a 6dB attenuation at the specified cutoff frequencies.

If the designed FIR filter will be used for sampling rate changing by an integer ratio, the aliasing of the signals above the first Nyquist region can be studied.

When a satisfactory FIR filter characteristic is obtained, the corresponding taps can be saved in various formats, depending on the actual needs. Also the parameters of the FIR filter can be exported in a text file to be available later. Alternatively, previously generated FIR filter taps can be loaded from a file or from the clipboard and the frequency characteristic of the filter can be studied or the taps can be saved in a different format. If the file formats that are implemented for loading and saving the FIR filter taps don't suit your needs, don't hesitate to contact us!

If you need more information on specific output formats don't hesitate to contact us!